After an 11.1 per cent rise in August, new van registrations rose by 10.3% in September, compared to September 2012, according to the latest figures from the Society of Motor Manufacturers & Traders (SMMT) meaning van sales are up by 9.6% on the year-to-date.

Truck registrations rose by 29.7% leaving the year-to-date total down by 0.1%.

'Encouragingly, van registration levels have stabilised, up around 10% in the month and year-to-date, after a variable year that reacted to model changes and changeable market conditions. Year-to-date truck demand is back to 2012 levels after a slow start to the year and we expect the last quarter to be very strong for the sector.' 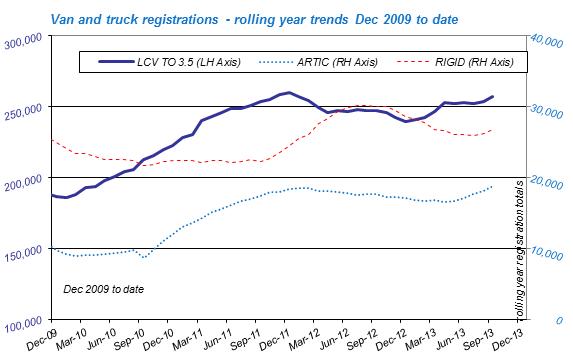 SMMT divides CV sales into three categories — vans under 3.5t, rigids, and artics. In each of these categories, registration growth was strongest in the heaviest weight category, in numerical terms.

That means that new registrations of vans between 2.5t and 3.5t, rigids over 16t, and 3-axle artics rose strongly last month, suggesting that those sectors of the economy that control the majority of usage of these vehicles (retail, construction and industry) have enough confidence to invest in fleet renewals.

Given that September’s plate change is often linked to a surge in sales, it will be interesting to see if the upwards momentum in registrations carries on through October.

And, of course, for those not wishing to invest in their own van or truck, Berkshire Van Hire is always adding to its fleet and has a great range of its own from which you can rent any vehicle suitable for your needs!